Sometimes you get involved in a project in academia that you really love. This happened to me carrying out some research on developing age friendly transport in the Greater Manchester area. The final report is now available here.

For me three things summed up why I enjoyed the project so much, the involvement of older people, a brilliant engaging audience at a workshop and being surrounded by great people from policy and practice.

(1) The involvement of older people throughout.

Throughout the work, it feels like the findings have been thoroughly shaped by older people themselves. I structured the work around a series of focus groups addressing four key areas I had identified as important for an age friendly transport system in some earlier work for Age Cymru (see page 14 here):

The workshops took place in Salford, Tameside, Bolton, Bury, Oldham and Wigan and were expertly coordinated and mainly run by Kirsty Bagnell from the Greater Manchester Centre for Voluntary Organisation. In each of the domains, participants were required to rank problems on how common the problem was and how important the issue was on a 2×2 grid, followed by solutions on a 2×2 grid based on how effective the solution was and how easy it was to implement. This helped prioritise key issues in an order, rather than simply present issues and problems.

Walking (in order of priority of importance and commonality):

Public Buses. (in order of priority of importance and commonality):

Railway service. Highest priority area was lack of help, tickets being confusing and not getting a seat. More minor priorities were accessibility at railway stations and cleanliness of trains.

Driving. Difficulty getting a blue disabled badge if needed on a temporary basis was noted.  Lack of drop off points near health centres and bus stops was also discussed. Finally cars parked on the road and on pavements can be an issue to drivers.

Policy. Not being involved in decisions affecting transport was frequently noted. Coupled with this was feeding back, including lack of confidence in reporting and time taken to make any changes. As  a participant in Oldham noted, “There’s no action when you complain.  You get no feedback.  You can complain to somebody but you don’t know that person’s passing the complaint on.” And a participant in Bury noted, “Very important to consult people whether they take any notice is another thing….sometimes you get invited to a lot of these consultations and you go and you sit and then you think what were the point because nothing’s changed” . Another issue noted, as often stressed by manchester’s  Mayor Andy Burnham, is the lack of investment in areas, like Greater Manchester, in comparison to London.

(2) A brilliant and engaging audience at a workshop. 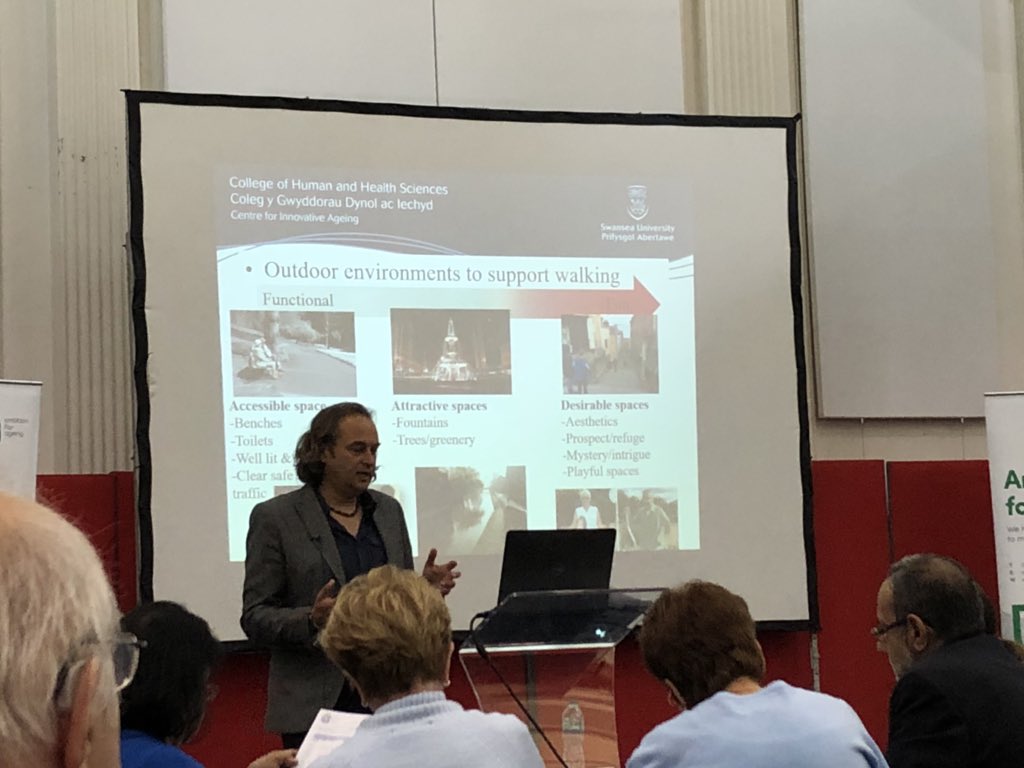 I had a chance to present the findings to date (and bring in some other material) in a workshop to around 80 or so older people and people representing older people’s charities and third sector organisations, at the Ambition for Ageing Seminar hosted by Greater Manchester Centre for Voluntary Organisation at their St Thomas Centre, Ardwick Green North. The audience became participants and my talk generated a lot of fascinating discussion throughout, and at the end I ran an exercise in groups to help shape some of the findings into priority areas, mimicking some of the earlier workshops. The participants ranked the solutions around priority and how long it would take for each solution to be implemented. Priority areas are those that older people felt needed to be done first and would have highest effect and included: training for frontline public transport staff, concessionary bus pass to operate before 9:30, developing a Transport Action Group to help get older people involved in transport policy and getting their voices heard, implementing a community toilet scheme and take a seat campaign and having audio-visual bus stops.

(3) Policy and practice makers were involved and listening throughout. Many of us academics working in gerontology see our research as very much applied. We don’t want our research sitting on dusty shelves of the university library rarely being looked at. We are in this to make a difference and to make a change to people’s lives. Greater Manchester has probably the best network of older people, charities, third sector organisations in the whole of the UK, if not the world. At the heart of the operations is Paul McGarry, (luckily we share a love of wanting to make a difference and also a love of prog rock) and his team who are so well connected there is real opportunity to make a difference. Naturally, the project involved a variety of partners throughout including Transport for Greater Manchester, Greater Manchester Ageing Hub at Greater Manchester Combined Authority, and the Centre for Ageing Better, with support from Ambition for Ageing at GMCVO. Hence, for this project we were working with people with some excellent connections and people who can make a change to the lives of older people. It was especially great to have the ear of Transport for Greater Manchester (TfGM), especially James Baldwin who was really helpful throughout and leant a sympathetic ear to the issues older people face using transport on a day to day basis. The final recommendations include:

Having TfGM involved throughout has really been useful in helping to set the context and the parameters of the work. With the findings and recommendations stemming from the older people themselves, TfGM have been able to see where and how the issues arise. TfGM are now tasked with responding to the recommendations made in the report.

So, overall a great project to be involved with, highlighting and championing older people’s transport issues and beginning to work towards some solutions.